Bruce Sterling (cyberpunk visionary, futurist, and design theorist) and Jasmina Tešanović (writer, activist, and filmmaker) were in residence at the Arthur C. Clarke Center for Human Imagination collaborating with Sheldon Brown and the Clarke Center to create an installation for the Vitra Design Museum from August 19 to September 15, 2016.

While here, Sterling and Tešanović discussed the state of design fiction and two recent projects of speculative design. Jasmina Tešanović spoke about Casa Jasmina, a mix of lab, gallery space, and B&B in Turin, Italy, that aims to integrate traditional Italian skills in furniture and interior design with emergent skills in Italian open-source electronics as applied to “the internet of Things in the Home.” Bruce Sterling discussed the upcoming installation for the Vitra Design Museum in Germany, which he and Jasmina were in residence at the Clarke Center to incubate. Their talks have since been featured on BoingBoing by Cory Doctorow as "an excellent way to spend an hour this weekend" and in the local media. 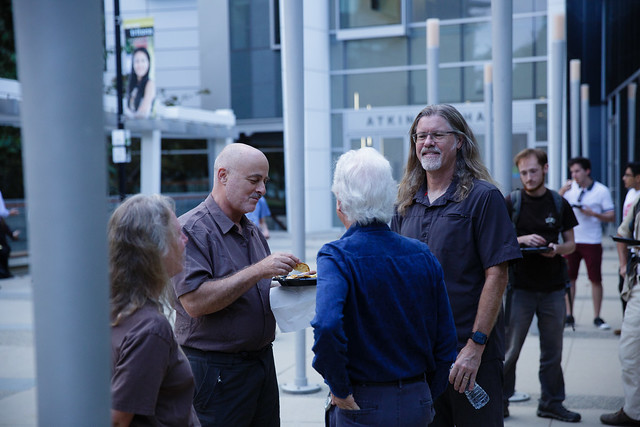 Futurist, journalist, science-fiction author and design critic, Bruce Sterling is best known for his novels and his seminal work on the Mirrorshades anthology, which defined the cyberpunk genre. Sterling’s writings have been very influential in the cyberpunk movement in literature, specifically the novels Heavy Weather (1994), Islands in the Net (1988), Schismatrix (1985), and The Artificial Kid (1980). In 2005, he became "visionary in residence" at the Art Center College of Design in Los Angeles. His list of accolades include the Campbell Award in 1989 for his novel Islands in the Net; the Hugo Award in 1997 and 1999 for his novelettes Bicycle Repairman and Taklamakan, respectively; the Hayakawa Award in 1999 also for Taklamakan; and the Clarke Award in 2000 for his novel Distraction. Sterling also founded the Viridian Design Movement, an environmental aesthetic movement founded on the ideas of global citizenship, environmental design, and techno-progressiveness. Bruce Sterling's numerous book-length essays both question and promote how the future is shaping our concepts of self, time, and space.

Feminist and political activist (Women in Black; CodePink) Jasmina Tešanović is a writer, journalist, translator and a film director. In 1978 she promoted the first feminist conference in Eastern Europe, “Drug-ca Zena” (Belgrade). With Slavica Stojanovic, she founded the first feminist publishing house in the Balkans, “Feminist 94.″ She is the author of Diary of a Political Idiot, translated in 12 languages: a war diary written during the 1999 conflict in Kosovo. Since then she has been publishing her work on blogs and other media, always connected to the Internet.

ShareTweet
← Back to Listings